Lymph nodes are small, bean shaped glands located along the lymphatics. They act as drainage and processing sites for lymph components. They are surrounded by a tough capsule which extends inside the gland in the form of trabeculae dividing the lymph node into compartments. The lymph node can be divided into an outer cortex and an inner medulla. It receives lymph from afferent lymphatics while lymph leaves the node via efferent lymphatics.

The cortex has an outer and inner zone. The outer cortical zone consists of follicles which are made of mature B cells and the inside of the follicle is called germinal center which consists of actively dividing B cells and plasma cells. Follicular dendritic cells are present in the cortex and have an important role in antigen presentation. Inner cortical zone is also known as paracortex or thymus dependent zone. You guessed it… it mainly has mature T cells.

The medulla has medullary cords of B cells and plasma cells. The medulla is the major site of antibody production. Macrophages are abundant in the medulla, performing their function of phagocytosis. These mechanisms have evolved as part of the body’s defense systems. [Think of lymphatics as Police patrols and lymph nodes like “detention facility”]

Reticular cells/ fibroblasts are present throughout the lymph node. Their primary function is to lay down reticular fibers and type III collagen as a structural support for the lymph node.

The efferent lymphatics and blood vessels leave the lymph node at the hilum.

Anatomy of the spleen

The spleen is a major secondary lymphoid organ. It is important to know the surface anatomy of the spleen to solve abdominal trauma questions. The spleen is located in the left hypochondrium and partly in the epigastrium. It extends from ribs 9 to 11 with its medial end located 5 cms from the midline.

Remember that a healthy spleen is not palpable in adults. In splenomegaly, the spleen weighs more than 500 grams or has a span (from one end to the other end) of more than 11 cms.

In kids it should be less than 10 cm at 8 years and less than 6 cms at 3 months. In age groups between 3 months to 8 years splenic size will range from 6 - 8 cms. At and above the age of 10 years, refer to adult size ranges. A palpable spleen is found in most premature infants and in 30% of term infants. A spleen tip is still palpable in 10% of infants at 1 year of age and in 1% of children at 10 years of age.

Normal spleens are soft at the midclavicular line, nontender, and often palpable only on deep inspiration. Dullness on percussion beyond the 11th intercostal space suggests splenomegaly.

A spleen edge palpated >2 cm below the costal margin is always an abnormal finding.

The spleen is a capsulated organ. The capsule extends into the splenic pulp as trabeculae. Splenic tissue is divided into red pulp, white pulp and a marginal zone in between.

Marginal zone is made of macrophages and antigen presenting cells like dendritic cells.

Red pulp consists mostly of RBCs. It is arranged in the form of cords of Billroth separated by venous sinusoids. Cords of Billroth are made of RBCs, macrophages, plasma cells and lymphocytes. Senescent and abnormal RBCs are broken down in the red pulp by splenic macrophages. 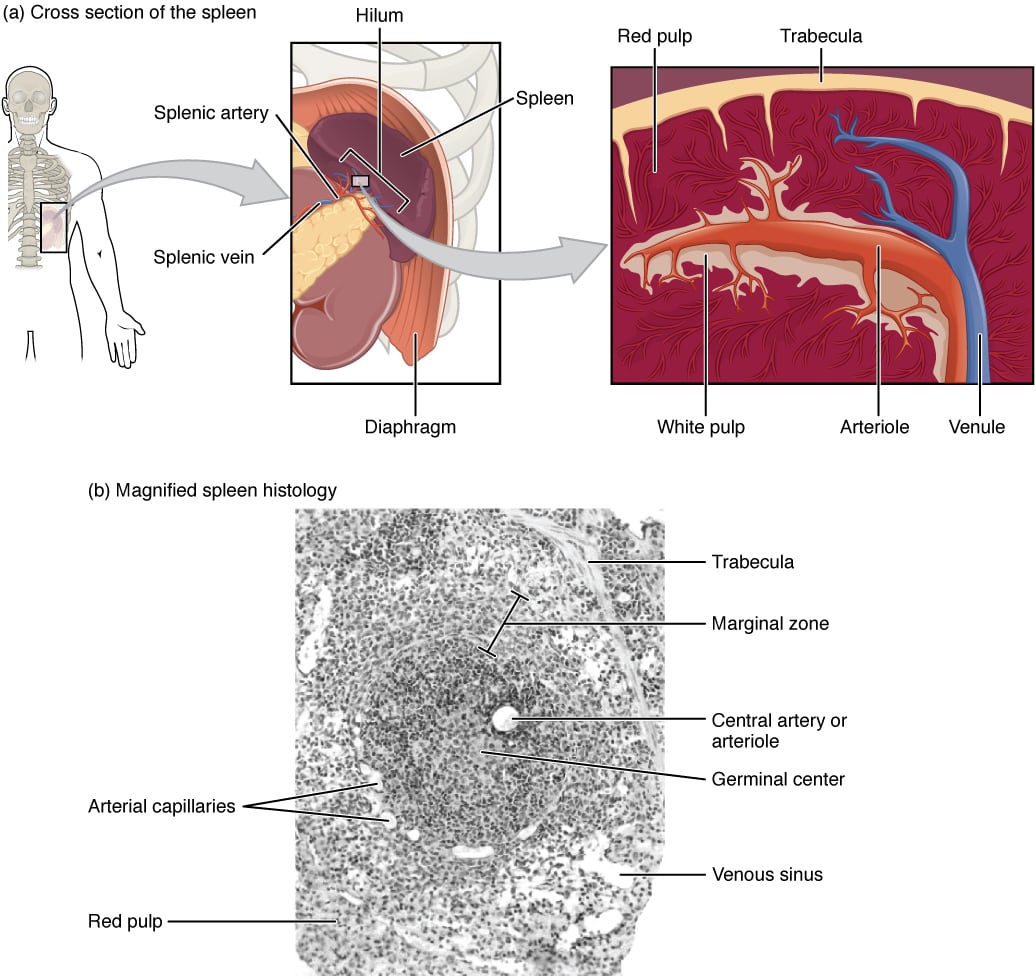 The spleen is attached to the stomach. (b) A micrograph of spleen tissue shows the germinal center. The marginal zone is the region between the red pulp and white pulp, which sequesters particulate antigens from the circulation and presents these antigens to lymphocytes in the white pulp. EM × 660.

Anatomy of the thymus

The thymus is an encapsulated, bilobed gland situated in the superior mediastinum behind the sternum, extending down to the anterior mediastinum. It is the site for T cell maturation. With age, the thymus undergoes involution and is replaced, in part, by adipose tissue. It is divided into an outer cortex and inner medulla. The cortex has thymocytes including T stem cells, Pre T cells and Immature T cells; thymic epitheliocytes which provide structural support and secrete thymotaxin, thymosin and thymopoietin which are involved in T cell maturation. Thymic epitheliocytes are also called “thymic nurse cells” as they essentially “nurse” the immature T cells to maturation. The medulla consists of mature T cells including CD4+ or helper T cells, CD8+ or cytotoxic T cells and suppressor T cells. It also has thymic epitheliocytes and Hassall’s corpuscles. In some infants, the thymus may appear as a triangular extension lateral to the mediastinum, called “thymic sail sign” (like the sail of a ship). 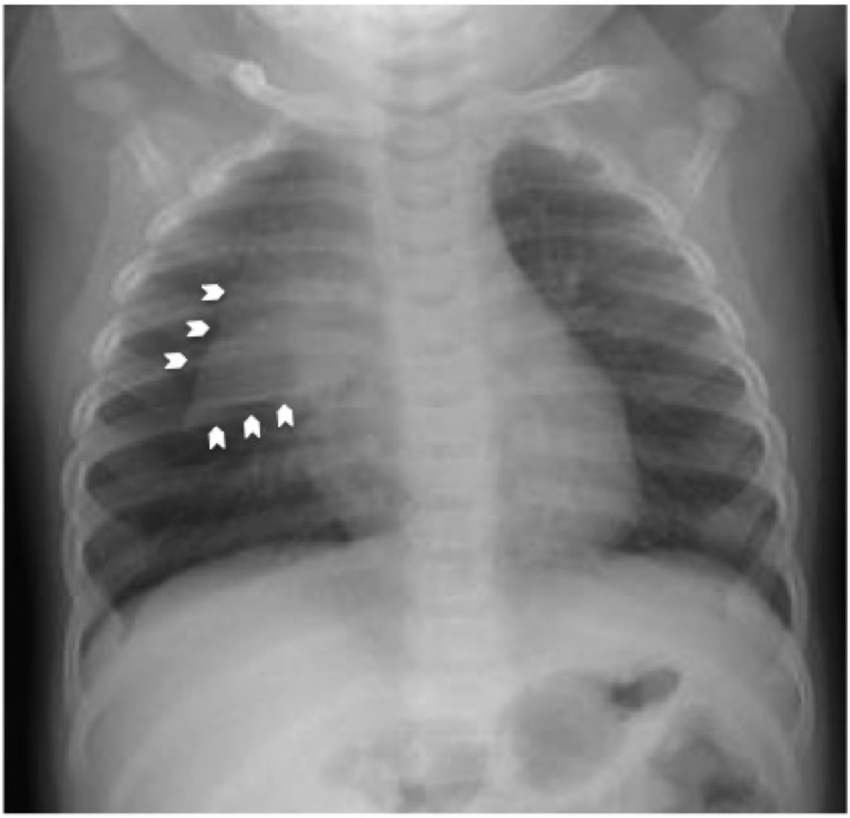 Hassall’s corpuscles are whorl like collections of thymic epithelial cells, macrophages, interdigitating dendritic cells, myoid cells and occasionally, mast cells and lymphocytes. They are involved with the removal of apoptotic thymocytes and the maturation of developing thymocytes. They play a vital role in the generation of regulatory T cells and the regulation of lymphopoiesis. 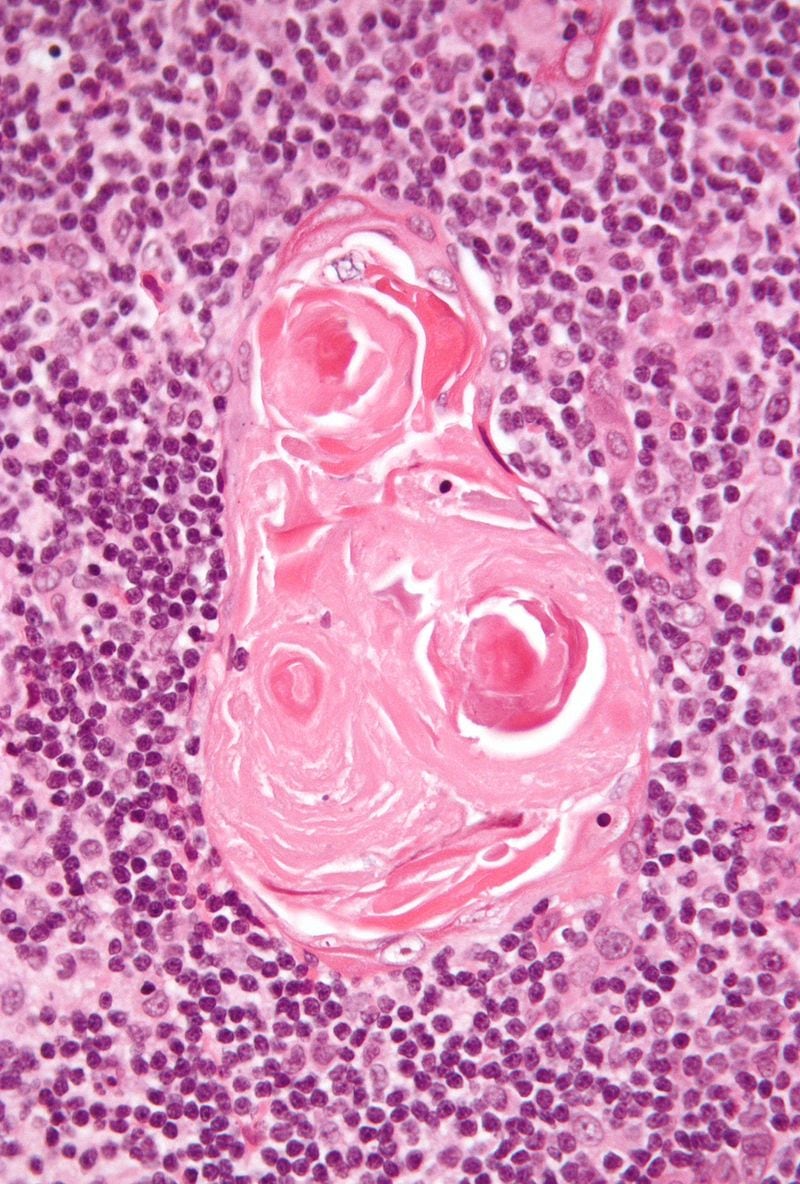 MALT contains roughly half of the lymphocytes of the immune system. It is situated along mucosa of gastrointestinal tract (GALT or gut associated), nasopharynx, bronchus, larynx, salivary glands, conjunctiva etc. MALT secretes IgA and mediates mainly a TH2 type immune response. It is also associated with the development of immune tolerance to antigens exposed to the mucosa. Intraepithelial lymphocytes, T-lymphocytes found amid epithelial cells of all mucosal tissues, are another component of MALT. M cells are specialized epithelial cells associated with MALT tissues which are involved in the transport of microorganisms and molecules from the intestinal lumen to MALT follicles. M cells lack microvilli and have tight cell junctions. They act like antigen presenting cells. Peyer’s patches are GALT present in the mucosa and submucosa along the antimesenteric border, most abundant in the jejunum. Immune response by MALT is initiated locally at inductive sites and the activated lymphocytes then migrate distally to effector sites.

Do you enjoy this work? If yes, please do well to visit Achievable. The link to the chapter is here

There are no comments yet.